Brittany, I miss your #wire106 work. Hope you have a great New Year.

#Wire106: Week 15-Time to Get Real with the Final Projects http://bavatuesdays.com/wire-106-week-15-time-to-get-real-with-the-final-projects

Above is my first Daily Create of the week: The Empathy Map. To have fun, I did it all in Noun Project icons, the credits are below.

This ds106radio discussion took place on September 18th, 2014 with Imran, Paul, and myself.

This ds106radio discussion took place on September 17th, 2014 with Paul, Imran, Maggie, Brittany, and Stefanie and myself.

D&D alignment chart for The Wire #ds106 #wire106 via @joefromkenyon

UMW really should have a class on The Wire #wire106

This is the interview Paul Bond and I had with sound editor Jen Ralston about her work on The Wire and more. She has a series of brilliant insights, and does a few close readings of scenes from season 1. It's an excellent resource for thinking more deeply about sound, which is appropriate given we will be introducing sound in #ds106 this week.

I was at Westmoreland State Park with my family today and I saw a pay phone by the visitors center and immediately thought of The Wire Everywhere assignment for ds106. It's interesting how the pay phone is becoming a vestigial technology in a society where a majority of folks carry one in their pocket (in addition to an extremely powerful computer).

I love the aesthetic of the pay phone, and it's a staple of The Wire season 1, so I figured I would capture just that. It's interesting how something as ubiquitous as this technology 25 years ago has vanished in the wake of the mobile revolution. The idea of vanishing technology like the pay phone is fascinating, and the idea that Grant Potter set it up so that you could broadcast to #ds106radio from a pay phone back in the day was one of the most interesting marriages of old and new technologies I've ever seen.

This is a GIF from episode 5,"The Pager," when D'Angelo starts an irreversible series of events.

This is my attempt at the "Summarize A Wire Episode In GIFs." I chose to pull six (actually seven) animated GIFs from episode 5 of Season 1 of The Wire: "The Pager." It's one of my favorite episodes because the theme of being watched and a more generalized sense of paranoia creeps into the episode constantly.

This is one of the earlier, if not earliest, episode where we hear the refrain: "Omar's coming!" As we all know, "the cheese stands alone!" ---and he'll be coming for Avon soon.

There's a lot of warnings in this episode, and I found an interesting parallel between Omar's raid on the East Side stash, and the young hopper's in the pit calling the warning for "5-0" that Stringer Bell and D'Angelo hear while talking about there being a snitch in D's ranks. Again, this constant sense of being watched, betrayed, and generally under someone else's control.

Love you are using Knownfhub or posting to Twitter. You can also post to Fllckr and wire106 hub and twitter all at once with Known. Though you may have to add tags manually to Flickr.

"Scenes from the Wire" http://bavatuesdays.com/scenes-from-the-wire-2/ Wire bots for #wire106? Thanks for the inspiration @zachwhalen #ds106

Here is a quick screencast showing you how to add text to GIFs in GIMP. And keep in mind, GIFs don't necessarily need text for the summary assignment.

First GIF of 6 for the 6 GIF Summary of a Wire episode. I chose Episode 5 "The Pager"
http://assignments.ds106.us/assignments/summarize-a-wire-episode-in-gifs/

Meredith Fierro, Jessica Reingold, Paul Bond and I discussed Episode 11 of Season 1 of The Wire: "The Hunt." This was special for me because it's the first time we had UMW students enrolled in ds106 join the discussions about the show. This will now be a regular, ongoing component of these video discussions, and based on this one it's going to be a lot of fun to start featuring everyone's readings of the series. If you're interested in being part of tomorrow's discussion of episode 12, "Cleaning Up," you can sign-up here to join in.

Here is a seen from S01E09 "Game Day" wherein Bubbles steals a bag of drugs from a dealer with a fishhook from the rooftop. Image credit goes to Scenes from the Wire Tumblr.

This is an animated GIF from Season 1, Episode 9 of The Wire: "Game Day" care of the awesome Scenes from the Wire Tumblr.

Shannon Hauser just gave me the heads up that the DVD set of The Wire is now in Simpson Library and on reserve for the semester. It's all in the game, yo.

While walking around the new building I now work in at UMW---I realized I was seeing The Wire everywhere. Specifically, in the carpet. 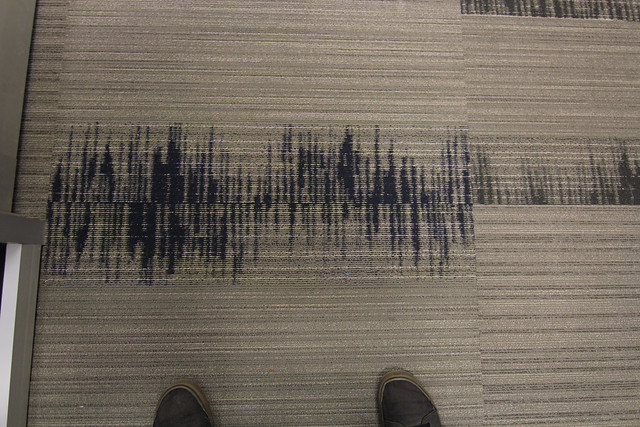 The carpet is a constant reminder, at least for me, of the iconic image that is associated with the series on its main Wikipedia page. 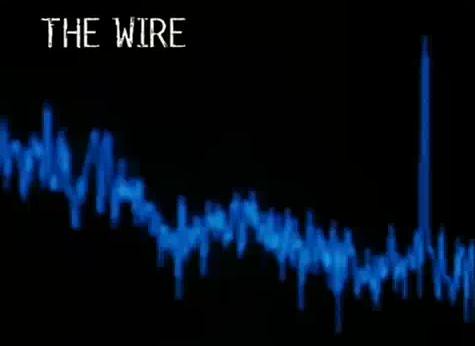 So I took a picture of the rug and then add a quick title (still working in PowerPoint  ;)) and took a screenshot.

You can see a comparison here. 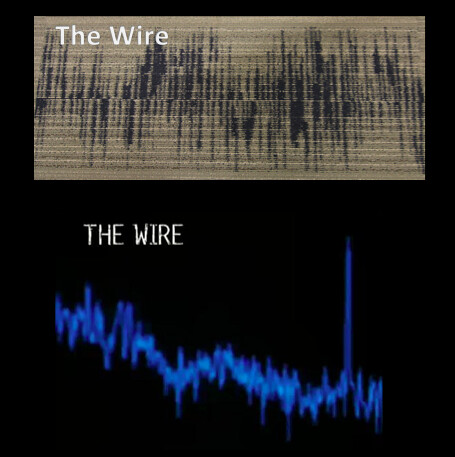 I would give myself one of the two stars I attributed to "The Wire Everywhere" assignment I created for this semester's ds106 visual assignments. For it to be awesome, I would need to use Photoshop or GIMP to make the colors of the rug match those of the series icon. I'll revisit this, but for now consider it yet another star, and a new #wire106 assignment to boot :)

.@aforgrave is always good for a course logo, and he didn't disappoint with #wire106